Labor of Love at High Five Arts, Mill No. 5, Lowell 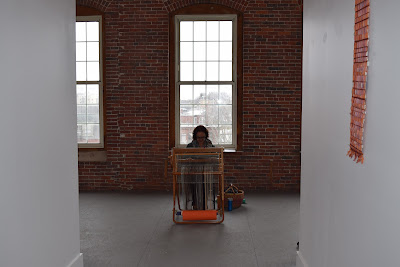 Change of Plans! Due to the winter weather that will be upon us this spring....Labor of Love opens next Saturday April 8th from 1-3 pm at Mill No. 5, 250 Jackson Street, High Five Arts Gallery 5th Floor, Lowell, MA 01852.

This exhibition includes two works from my series of woven portraits, the most recent one, Catherine (2017), was created at the Studios at MASS MoCA and is made from using my Nana's wedding dress and parts of my own wedding dress combined into a new fabric. Next to Catherine is Bernie, a tribute to my uncle created my weaving his old leather coat. Both pieces honor the memories people who were very important to me.

Displayed in the narrow hallway of this old mill building is a series of woven pieces about labor, 3,570 minutes in total. Scout Hutchinson writes, "Piwinski similarly integrates unexpected materials into her time-based woven pieces, seven which are on view in Labor of Love. Their titles reflect the total number of minutes the artist spent creating them. Materials such as folded pages from a textbook, strips of old letters, and notes from an art history class are recontextualized within the warp and weft of these narrow lengths of woven cloth. They cascade down the gallery walls, serving as vibrant and textual markers of time - time spent in class, in a relationship, or simply on creating the artwork itself." 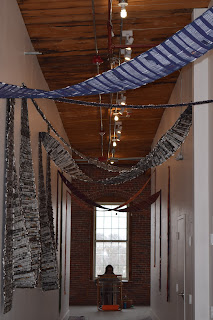 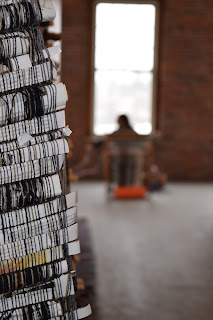 As part of this exhibition, I have been weaving in the space on my Saori loom. I have been there two Sundays so far and have had several visitors and participants such as David and his daughter pictured below. 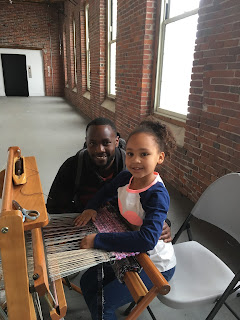 Each Sunday the fourth floor is full of life- live music, a farmer's market, several unique vendors and more. Yet, only some adventurous visitors find me weaving up on the fifth floor. Visitors have told me that it is a magical discovery to find the exhibition and have appreciated being able to ask questions about the exhibition and have conversations. With the help of others, another piece will be added to the show just in time for the opening on Saturday afternoon, 529 minutes of VT Flannel. This brings the total number of minutes up to 4,099. 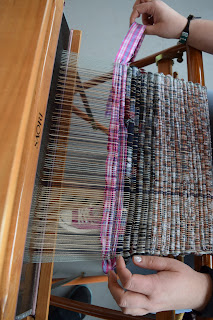 In addition to the opening reception next Saturday, I will be weaving in the space other times. If you are interested in becoming a part of the project, please join me...

Posted by Stacey Piwinski at 6:50 PM No comments:


One month ago, I was weaving at MASS MoCA with many participants. While at the MASS MoCA residency, I wanted to work with building's rich and layered history. Before these space where galleries, they were once part of the Sprague Electrical Company and even before that they were Arnold Print Works. The history of these gallery spaces once being a part of a textile printing facility was of interest to me.

I enjoy working with the layers of history, as shown here in a piece I did about Vermont using bits of wool from the Johnson Mill and remnants of flannel from the Vermont Flannel Company.

I have also been interested in involving people in the creation of the fabrics so I have set up my loom in places such as galleries, beaches and laundry mats.

Building #7 was once the bleaching house. Fabrics would be woven at other surrounding mills and brought here to be bleached, whitened and void of any imperfections before they were dyed and printed. Now Building #7 houses the Sol Lewitt installations. Many people came together to follow his instructions and create these murals without showing any evidence of the human hand. The Saori weaving philosophy is the opposite. It is about embracing mistakes and letting the evidence of human hands show through in the work. To quote Saori's founder, Miaso Jo, " Existence of people is in their expression, we won't exist without it."

Saori weaving is a contemporary Japanese method which I learned from Mihoko Wakabayashi at Saori Worcester http://www.saoriworcester.com/ Here are a couple of photos of us from when Mihoko and her son Nori visited me while in residence.


Sunday, February 19th I was set up near Sol Lewitt's Wall Drawing 422. I had thirty participants that day of all ages and from many different places from Boston to Alaska and from New York to France. 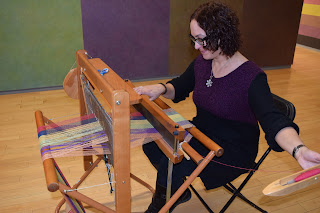 Fellow MASS MoCA resident, Penny Mateer (www.pennymateer.com), who also works with fibers and understands that when your hands are working, there is a natural tendency for deeper conversations. We were both interested in having dialogues with the visitors about the current exhibitions, especially the Nick Cave show, Until. This part of the Sol Lewitt wall drawings bumps right up next to an entry way into Nick Cave's installation. This little girl was clearly interested in trying the loom, just look at her face! However, it was with this family from Boston that we had a conversation about the Nick Cave show and that dialogue would have never happened without this hands on experience to help start the exchange. 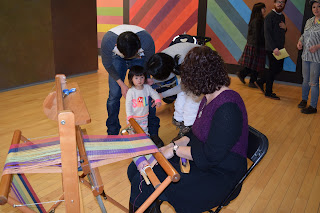 "It was fascinating to watch how visitors were drawn to Stacey weaving. Many eagerly responded to the opportunity to participate, a testimony to the power of making.  But what excited me most were the interactions which resulted in meaningful conversation about the historical significance of the building and the art within it's walls, that arose naturally while volunteers wove.  An example is a discussion with a young family who responded to the expansiveness of Nick Cave's Until but did not realize that Cave was tackling issues around race and social justice.  This led to his earlier work with Soundsuits, which in turn sparked their interest to research his work further.  The conversation inspired them to share the animated video Castle in the Sky which parallels Until by depicting an immersive world which reflects universal struggles and asks what if?" Penny Mateer 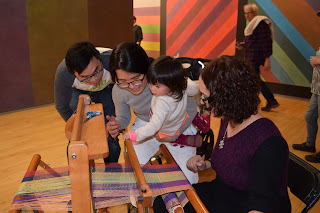 My youngest participant that day was able to push and pull the beater bar adding a few rows to the community made fabric.


There was a nice flow of people that Sunday, but on Monday (the first day of school vacation week) it was even busier. Kids lines up to try the loom and add to the project. I actually had a line of people waiting. There were many comments about how they were happy to be interacting in the galleries instead of just looking. 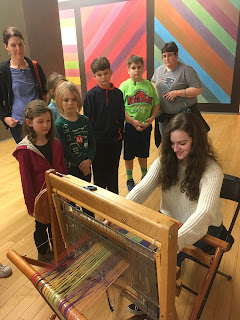 Over the course of two days and in six hours time, over fifty people participated in the creation of this fabric. However, my very last participant was quite memorable. A boy named Luca who clearly had lots of energy and was really interested to try the loom. He sat down and was immediately focused. His mom was pleasantly surprised. I was joking about how weaving and textile manufacturing holds a history of child labor, but now what once was child labor has turned into a recreational activity or a meditative way to settle and calm and fast-paced little boy. Someone walked by and said, "I hope that you are paying him minimum wage!" The mother looked up and said, " I should be paying her!" Times have changed!

Luca wove the most of any of my participants. He moved quickly and did not want to stop. I told his mother about a Saori studio in NY called Loop of the Loom (https://www.loopoftheloom.com). It turns out that the weaving studio is right near where he goes to school. I really hope that he goes there and continues to weave. It seemed like a perfect fit for him and he left feeling so happy and proud of what he had done. When he signed my book, he wrote his name and then he wrote, "I did art at the Mass MoCA." I can't think of a better way to complete this piece of fabric. Thanks Luca! 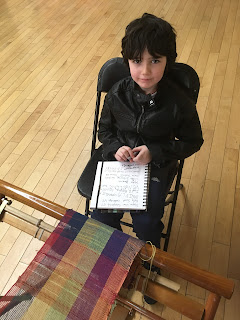 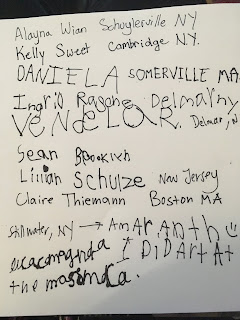 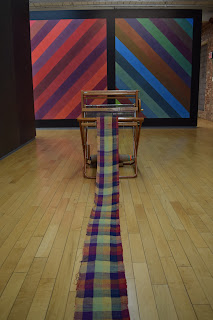 Chances pass by silently, grabbing it or not is up to your heart. -Miaso Jo